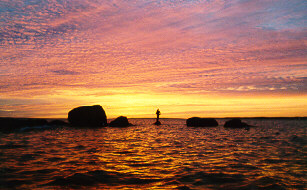 It was a night of storm in late October several years ago when Spencer Hoffman and I decided to make a late night fly fishing excursion to Squibnocket Point, on the southwest corner of the island of Martha's Vineyard. The rumor of big bass had enticed us to attempt the hike out to the point, even though neither of us had ever fished the area before. Having suffered through several frustrating and fishless days of increasingly bad weather, we were willing to take a chance on a new spot, even though we were unfamiliar with the water there.

Squibnocket Point and the surrounding waters are legendary in the fishing lore of the island. Big boulders, strong tides, and wave action combine to produce the kind of habitat that striped bass love, especially big ones. Squibnocket is a reef with little in the way of shallow water, except near the shoreline among the rocks and boulders. Surfcasters with casting or spinning tackle have long frequented the area after dark, slinging eels or plugs out past the breakers to the edge of the deep water where mythical sized stripers prowl. Most of the fly rodders that we talked to had never fished the place, or if they had, told us that it was a difficult place to fish at best. Not to be discouraged by these reports, we decided to make the hike out anyway. "How bad could it be?", we asked ourselves.

Frustrated by the heavy wind and weather, but excited by the prospect of fish, we hurriedly packed our gear into Spencer's old jeep. We downed a couple of cups of coffee to stimulate our brain cells, then headed up-island. When we pulled into the lot at Squibnocket Beach, we saw only one truck parked there. That should have been a clue that conditions were less than perfect for a first time trip to Squibnocket, but neither of us was smart enough to read the signs. As I stepped out of the jeep, I braced myself against the stiff northwest blow. Spencer and I turned and looked at each other. "Looks pretty rough", said Spencer. "Maybe we should stay in", I said, echoing his concerns about the wind. "Nah, lets go!", we both said simultaneously, so against our better judgment we proceeded to put on our waders and rig our tackle.

Five minutes later we were headed west along the beach. Although other fishermen had told us that the walking was tough on the hike out to the point, we weren't prepared for the conditions that we found there. The "beach" was composed of big rocks the size and shape of bowling balls. Used to strolling the even terrain of sand by starlight, I found myself having to keep my flashlight turned on all of the time. A nagging voice in the back of my head kept trying to remind me that the batteries in my light were probably getting weak, but I ignored it.

After about twenty minutes of picking our way among the rocks, we decided to start fishing. The old guy who had given us the tip about the Point had told us that the good water was at least a half hour's hike from the parking, but both Spencer and I were beginning to get disoriented. Between the wind swirling around us, and the difficulty of finding a path, we had become confused, and weren't exactly sure of where we were in relation to the Point. Then we saw a fisherman's light approaching from further down the beach. "Let's talk to this guy", I said to Spencer. "Maybe he can tell us where to fish".

The other fisherman stopped when he saw the two of us. "Any luck?", I asked as he stopped in front of us. In answer, he slung a big bass off of his back where it hung from a length of rope. "Whoa!" we exclaimed. The bass was about a thirty pounder, larger by far than anything either of us had taken on a fly at the time. "Where'd you catch it?", asked Spencer. "Back at the point," said the fisherman. "Got him on an eel!", he added, pointing to a small bucket that he carried with him. "You think we might be able to fish out there?", I asked. "Fly rodders, huh?" grunted the other angler. He studied us as we nodded our heads. "You might be able to fish one or two spots, but it's going to be pretty hard. Maybe you guys should come back out here in the daytime and check it out first". After a couple of tips on one or two sheltered areas where he thought we might be able to cast, he picked up his fish and started back towards the parking lot. As he left us, I could see him shaking his head gently from side to side.

Discouraged by the other angler's words of warning, but excited by the sight of that big bass, we struggled further up the beach to a small bowl that the eel slinger had recommended. Without waiting for Spencer, I began to wade out into the waist-deep water. Picking my way among the slippery boulders, I began to work out a short length of line. Long strands of rockweed wrapped around my waders with the action of the tide. As I stripped in for another cast, the wind picked my line up out of my stripping basket, and blew it into the water. As I hurried to get the line back into the basket, a wave rolled in, filling my stripping basket with water. "It's pretty rough out here!", I shouted to Spence, who was still busy trying to find his way out among the rocks. Preparing to make another cast, I found that the wave action had carried my flyline under a submerged rock. Reaching down to free the line, I didn't see another, much larger swell that was rolling in to the beach until it was too late.

Without a warning I felt the full blow of a storm driven swell rolling in over the reef. Bowled over by the wave, I was battered among the rocks in the water near shore. My waders filled with water, my line was still trapped in the rocks, and my stripping basket hindered me as I tried to stand up again among the weed and mussel-covered rocks. I slipped and fell as I tried to regain my feet. Putting out a hand to save myself, I felt a sharp pain as a barnacle or mussel cut into the palm of my hand. I had started to panic slightly when I felt a hand grab on to my wading belt, and Spencer hauled me to my feet.

"You okay, dude?" Spencer's face looked pretty worried from what I could see of it in the gloom. "I cut my hand", I groaned. "Let's get out of here". Although he could easily see that I was soaked, what Spencer couldn't see was just how scared I had been when I got bowled over by that wave.

As we picked way our way among the rocks back to the car, first my flashlight, then Spencer's gave out. The last fifteen minutes were hell - bruised and bleeding, stumbling along in the dark without a light, becoming increasingly chilled by the bitter October wind. I know now why the hike out to Squibnocket Point is sometimes referred to as "the death march" by some of the locals. By the time we made it to the jeep, I was in the early stages of hypothermia, teeth chattering uncontrollably, and too weak to remove my waders. The heater in the old jeep didn't work, and I froze in my wet waders during the half hour ride back to the house in Edgartown. As I fought to warm myself under a hot shower back at the house, I swore to myself that I would never again ignore the threat of danger while fishing at night.

In the years since, I have enjoyed many pleasant and successful night fishing excursions, even at those times when conditions were less than perfect. Although our trip to Squibnocket was not typical of a night fishing trip, some element of danger always exists while fishing after sundown. This element can add to the excitement of fishing the midnight hours, but I learned firsthand never to ignore the signs of real danger. With careful planning and preparation, and a little forethought, anglers can look forward to a lifetime of enjoyment spent wandering the tide lines after dark.

So you want to experience the excitement and challenge of night fishing? Here are a few ideas to prepare you for a successful night fishing trip.

1. Think about where you will be fishing. This is the first step to a successful night fishing trip. Ideally, pick an area that you are already familiar with. Night fishing in unfamiliar territory can be uncomfortable, and possibly treacherous. Don't plan a trip to waters that you have never fished before, unless you have the assistance of someone who knows the place like the back of their hand. Know the type of water that you will most likely be fishing, and have some idea of what you'll find when you get there. If the tide is outgoing, rocks and flats can be slippery at low water. If the tide is incoming, take care not to get stranded far from shore.

2. Some areas that you wouldn't worry about fishing during daylight hours might be best avoided after dark. Nighttime can cloud your judgment, and make it more difficult to assess the tidal and surf conditions. I recall a night this past October when a friend of mine nearly waded off a sandbar into deep water near a powerful rip. In daylight he could easily have seen the drop-off.

3. Go with a buddy. Why go out fishing alone when you could share the experience, and stay safe, too? I have fished alone at night many times and I love it, and I can assure you that it is always more enjoyable, and less intimidating with a friend along. It's also a good idea to tell someone at home where you are planning to go, and when you expect to return. Don't hesitate to leave a note outlining your plans for the evening. If the worst occurs, help will be on the way to you that much faster.

4. Pay attention to your instincts. They exist to warn you of danger, and are rarely mistaken. If things get a little too rough, back off. The ability to objectively evaluate one's own abilities and weaknesses, and the fishing conditions, can serve as a useful guide to any angler who fishes at night

5. Travel light. Don't get bogged down carrying a lot of extra gear. One exception to this is flashlights. Carry two; if you lose or break one, you have a spare. Batteries should be fresh before you hit the beach.

6. Heed any forecasts for bad weather. The wind can improve the fishing in many saltwater situations, but an evening of really howling wind and rain might be better spent tying up a few flies than bucking 30 knots with a 10 weight. Storm conditions are uncomfortable at best when fishing at night, and at worst they can be downright dangerous.

7. Keep a first aid kit in the fishing car. In addition to bandages, etc., it's not a bad idea to carry a change of clothes and a blanket sealed in a large plastic bag in case of emergencies. A thermos of a hot beverage is always welcome when returning to the vehicle after night fishing, especially in the fall when the air is cold.


[Wade Back to The Home Page]